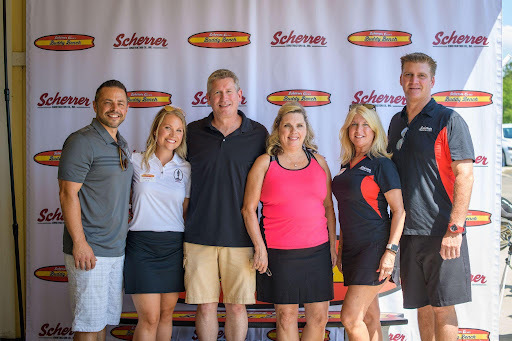 Like all years, this year, too, the Scherrer Cares Golf Outing has managed to raise a record-breaking $156,000. The annual fundraiser was held on the 10th of June.

The 7th annual fundraiser was held on June 10th, and like all previous years, it has managed to raise more money than previous events. This year, the fundraiser was able to raise over $156,000, the most money raised in the 7 years that the company has been hosting the golf outing. The annual event is hosted to give back to the community and the funds will be used to help various community projects. Participants know that the money will always go to help & support many worthwhile causes.

The Scherrer Construction 7th annual fundraiser featured a roster of over 200 golfers who played at the event, but there were several others who joined the auction after dinner. Over 50 items were sold at auction, which included vacation trips to Up North and Aruba. There was also an auction for an autographed major league jersey by none other than actor Charlie Sheen.

The cocktail hour is when the ball drop took place, which gave one lucky winner $3k in cash. In addition to this, the 50/50 raffle, like all years, was a major hit, and it alone raised $3,875. Another part of the fundraising was "The Power Minute," which took place to help Paws4People, an organization that raises and trains dogs for people living with a multitude of disabilities, including children, military veterans, and more.

Astonishingly “The Power Minute” raised $10,000, putting it amongst the most successful events.

The 7th Annual Scherrer Cares Golf Outing had two new sponsors in 2021, Lee Mechanical and Lynch Truck Center, which joined several others like Next Electric, Ackerman Glass, LW Meyer, BP Tec, and many more. President of Scherrer Construction Jim Scherrer said "We cannot thank our sponsors and donors enough, as our event wouldn't be nearly as successful without their support." Quoted from the company's internal press release.

"We started the buddy bench program in the beginning largely due to our heavy involvement in school construction. Since then we've had overwhelming support throughout the past several years, we are now supporting other organizations that follow our same mission." – Jim Scherrer, President & CEO of Scherrer Construction

Scherrer added, "We are so proud of the fact that our annual golf outing continues to do so much good for the community. It not only gives back to the community, but we see it improve so many lives that it's hard to believe. That's why we remain committed to the event, and that's what continues to draw in new sponsors and participants. If anything, our auctions are a pretty significant draw for most people."

Scherrer Construction started Scherrer Cares in 2014; it is a non-profit organization, with its first effort being the Buddy Bench program. It was the first of its kind anti-bullying initiative which placed buddies on benches in various schools across Wisconsin, which helped kids spread the word of kindness and make new friends.

The program has since then grown to over a hundred benches now in parks and schools, impacting thousands of kids across the state. As of late, the program has also been expanded through donation efforts to other causes that support Scherrer Cares' overall mission of building kindness into communities.

The company also makes donations to Fishing for Good, Back the Badge, and Paws4People.